The 31st Paris to Chartres Pilgrimage 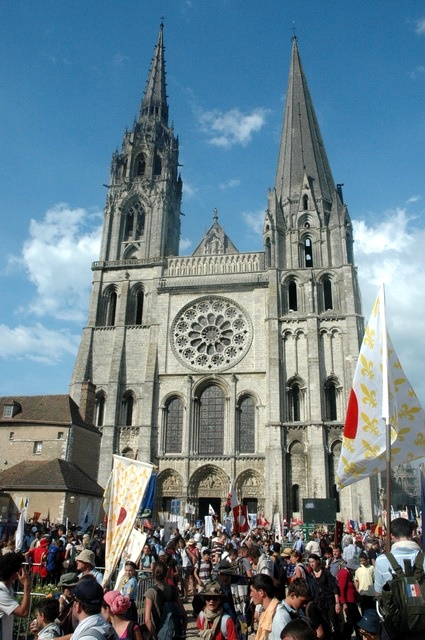 Pilgrimage to Chartres is a tradition that reaches back into the depths of history. The pagans venerated the Virgo Paritura or Virgin giving birth to a God; the Christians
took that to be a dim prefiguring of Our Blessed Lady and built successive Churches and then Cathedrals on the site of the current Cathedral in Chartres.

The present pilgrimage, which originated in the 12th century,  was revived in 1983
after nearly a century of neglect, and draws a crowd of upwards of 12,000 pilgrims
from over 30 countries for three days of prayer and penance.

Pilgrims are organized into groups of 20-60 people. Each group is referred to as a 'chapter'.
Pilgrims walk through the streets of Paris, the countryside, and finally the city of Chartres.
The terrain can be muddy, rocky, an demanding, but the rewards of such a penitential
exercise are eternal.


Chapters are led by laymen, with the help of chaplains, who organise the chapter, meditations
rosary, and prayers. Chaplains, priests and religious accompany the pilgrims as they walk,
hearing confession and teaching. The Mass is celebrated every day according to the Roman
Missal of Pope John XXIII. The liturgy is the traditional Latin one: magnificent instrument
or prayer, stressing the universal character of the Mass.

The Irish Chapter, under the patronage of St Patrick, has taken part in the pilgrimage since
1998. As well as pilgrims from all over Ireland, we welcome people from other countries
who wish to walk with us.